The Suleski Transportation traveled for its annual trip to York, PA.

Now you might wonder why the CEO of a railroad empire would travel by truck to York.  The main reason is that most of the NHGRS club members don't live by tracks in NH so a lot of the club equipment must be transported by truck.  Now you may also wonder why it isn't then taken TOFC (That's trailer on flat car for those who don't know)  That is because Suleski Transportations Rail Equipment that is going to the show leaves earlier.  Even though we have trackage rights that were negotiated during the split up of Conrail we don't have priority and spend time in sidings and yards in NJ.  But it is all worth it to display our equipment for all to see.

Now this year we nearly didn't make it as a late winter storm hit the mountains in upper Pennsylvania.  Two tractor trailers jack knifed on the ice and snow covered road and crashed in front of us blocking the highway.  No one was hurt so my EMT services were not required. 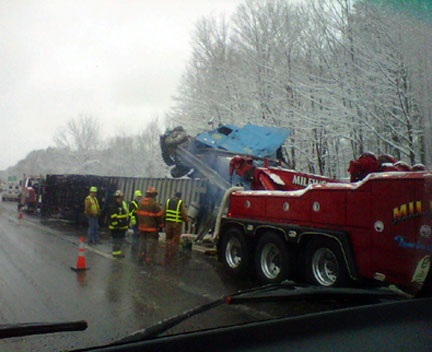 A Patron fell dead on the steps of Casey’s Diner yesterday at 5:30 pm as he exited from the building.
It happened right during the dinner rush.  EMT's and Police were called to the scene along with the York Board of Health.
The patrons name is being withheld pending notification of next of kin.

Cause of death has not been determined by the York Medical Examiners office, but Casey's Diner is empty of patrons as rumors abound over something he ate may have been the cause.

The owner of Casey’s, Barbara Kessler, was unavailable for comment at the scene.
If you'll remember Casey's was in the news last year for a rat infestation during its grand opening.  See story archive
Casey’s will remain closed pending the outcome of investigations by the York Board of Health. 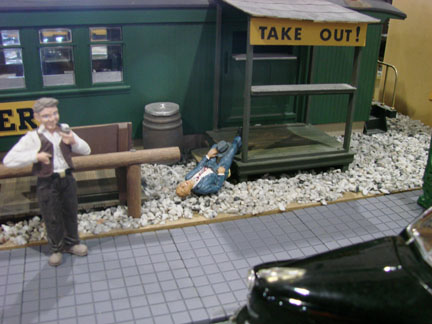 In other York News 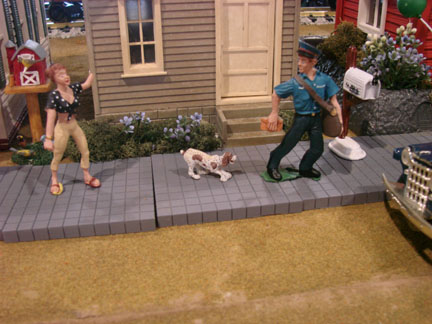 Miss Lucile Buxholm was found screaming hysterically as she and her dog chased away the mailman who she alleges was peeking in her window as she was getting dressed.
The US Postal service would not comment.  You'll remember Miss Buxholm was one of the patrons who ran from Casey's diner during its rat infestation problem.

Who knows what will happen tomorrow.