Police were called back to the scene along with the York Board of Health as neighbors saw
rats once again on the diners roof.

The owner of Casey’s, Barbara Kessler, was still unavailable for comment at the scene.
It is believed she was last seen leaving York and heading to parts unknown.
Casey’s will remain closed until further investigations by the York Board of Health.

Before leaving York Mrs Kessler allegedly pushed one of the Pirate players that worked for Pete Briggs on the the rails in front of a train.
We believe this was done to create confusion so she could slip away.

Rescue Workers were called to the scene 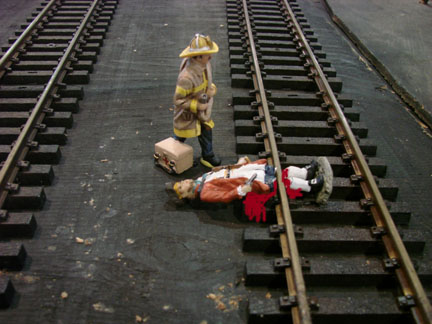 With some quick tourniquet work and super glue rescue team members had the pirate captain up on crutches. 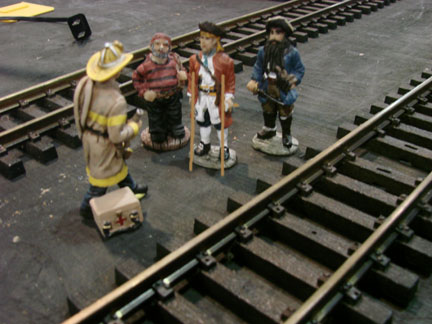 Playing the tough pirate made him want to get back to work even though he didn't end up with peg legs.

Yesterday afternoon at the East Coast Large Scale Train Show members of the NHGRS ran trains on Big Green.
Bob Clark had an accident with one of his trains.
John Foley ran his large 7/8's engine and this time no deer were killed.
Bob Clark had another accident with one of his trains.
Dave Sawyer added a new Northeast style center cupola B&M Caboose to his train.
John Foley ran his Crescent Limited green pacific with matching heavy weight passenger cars until it fell off a curve and crashed.
we hope it will be able to be repaired.
Alan Kessler ran his trains oblivious to his wife's problem.
Mike and Corey ran their RC Cola and Buddy L Prairie engines.
Bob Clark had another train accident.
Tiny ran his RDC budd cars
Dave Miller ran his J.L.& DM Trains.
Bob Clark ran through a switch and crashed into a parked train on a siding.
Larry Mosher ran his live steam Aster Berkshire on the live steam layout.
Lou ran one of Bob Clarks trains without incident.

Is it any wonder he is referred to as Crash Clark.

Suleski Transportation Railroad Police were in force and their were no incidents with the Blue Moose.

We did get to see lots of old friends and make some new ones.
Overall it was another successful Trip to the ECLSTS.